Nasal congestion is also known as a stuffed nose. This is usually an indication of health conditions especially a sinus infection but can also be caused by common cold.

Nasal congestion is characterized by sinus pain, runny or stuffy nose, buildup of mucus and inflamed nasal tissues. Home therapies can help alleviate the condition especially if it is caused by common cold. Nevertheless, if the individual experiences chronic congestion, it is best to undergo medical treatment. 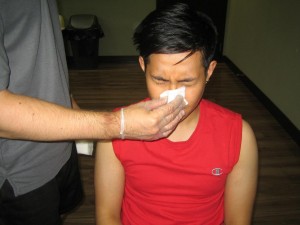 In most cases, minor illnesses are the common causes of nasal congestion especially flu, cold and sinus infections. Once the nose is blocked and inflamed, it is congested. Nasal congestion that is caused by illnesses typically improves on its own in a span of a week. In case the congestion lasts for more than a week, it often indicates an underlying health condition.  Long-term nasal congestion might be due to:

During pregnancy, congestion might also occur and usually starts during the end of the first trimester. This can be due to the hormonal changes as well as the elevated blood supply that occurs during pregnancy. Take note that these changes can disturb the membranes, making them to dry, inflamed and even bleed in some cases.

Even at home, nasal congestion can be treated. Using humidifiers can add moisture to the air in order to help break down the mucus as well as soothe the inflamed nasal passageways. Nevertheless, for individuals who have asthma, it is best to consult a doctor first before using one. When using a humidifier, the head should be propped on pillows so that it will promote the easy flow of mucus from the nasal passages.

There are even non-medicated solutions that can be bought in any drugstore such as a saline spray. Take note that these sprays can be used when needed all throughout the day and they function by breaking down the mucus and providing a soothing sensation on nostrils that are inflamed. A saline spray is relatively safe for all ages but for babies, an aspirator should be used afterward in order to remove leftover mucus from the nose of the baby.

In some cases, if the home remedies could not relieve the congestion, especially those caused by health conditions, it is important to seek medical treatment as soon as possible.

Consult a doctor right away if the following are present:

The moment your doctor has figured out the exact cause of the congestion, a treatment plan is recommended that usually involves over-the-counter or prescription medications to provide relief to the symptoms.