Hospital emergency preparedness plans are an integral aspect of primary level care and disaster management in times of catastrophes, calamities as well as terrorist attacks wherein such event could lead to mass casualties and could bring about societal instability.

Who are responsible in creating hospital emergency preparedness plans?

Before the basic emergency operation plan can be developed, the planning committee of a health care facility will first evaluate the characteristics of the targeted community to identify the most likely types of natural and man-made disasters that might occur in their respective community. The conceptual and evaluative process is the main responsibility of the local health care facility and its safety committee, safety officers or its emergency department manager. Basically, these people and group of individuals will be tasked in studying and evaluating the constant changes in the variables of a community at risk of natural and manmade disasters.

Delegated individuals who are tasked in the study and preparation of hospital emergency preparedness plans would normally research and gather relevant data from various government units such as the local enforcement, fire departments and other independent emergency medical systems. Upon the sufficiency of data gathered from these local agencies such as local train and automobile traffic, flood prone areas, presence of fault lines and local weather, committees or persons in charge of the assessment can now map out an appropriate and realistic disaster management plan. Moreover, many of the considerations are also given to the possibility of mass casualties that could arise because of a community’s close proximity to chemical plants, nuclear facilities and military bases. 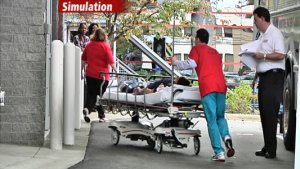 The emergency preparedness planning committee must have a specific, measurable, attainable, realistic and time bounded understanding of its limited resources in effectively preparing for large scale disasters and mass casualties. It must be determined, for example, whether the facility has or needs a pharmaceutical stockpile available to treat specific chemical or biological agents.  Moreover, the community as well as the health care facility charged with disaster management protocols must have an effective outline on how limited personnel and staff would triage and assign priority to victims especially that the number of life-saving equipments are very limited. It is a noteworthy limitation that multiple factors can greatly affect and influence a facility’s ability to respond effectively to a sudden influx of injured victims. Hence, continuous updates and skills training is an integral aspect in hospital emergency preparedness plans.