Ragweed is a weed found in the Midwestern and eastern states that grow in open grass fields, along river banks, near roadsides and vacant lots. Ragweed grows in very warm climates and the season for allergy sufferers occurs from July through the end of October.

Ragweed belongs to the sunflower family and the pollens released from flowers will scatter around with the flow of air. They are very light and travel far distances and allergy to the plant is rampant in places even if there are no plants around.

Pollen of ragweed is harmless for a normal person, but some people are very sensitive and their immune system reacts instantly when inhaling pollen and triggers the manifestation of the allergic symptoms.

Allergy to the pollen can affect anyone from children to adult and males or females are equally affected. People who are allergic experience symptoms such as asthma and sinusitis. To learn to recognize and manage allergies including ragweed allergy, register for a first aid course with a credible Canadian provider near you. 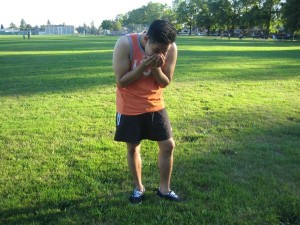 The common symptoms of ragweed allergy include runny nose and sneezing.

Avoiding pollen from being inhaled is an important step in preventing flare ups. During seasons of abundant ragweed pollen, use a HEPA vacuum and air purifier in order to remove pollen of ragweed that might enter the house. Stay indoors during the high season of ragweed pollen and close the windows.